The Early History of the Rockwood First Congregational Church

Perhaps because of its size and location, many in the metropolitan Detroit area do not know that such a community as “Rockwood, Michigan” exists in their county. It is the smallest and most southeastern city in Wayne County, claiming 3,442 citizens as of the year 2000. Originally occupied by representatives of the Huron Native American tribe, evidence of their presence remains in the naming of the Huron River that borders the city to the south and Huron River Drive, the primary east-west road through town. Later French settlers also impacted the development of the community, establishing fur trading posts and purchasing large plots of land; many of the descendants of these French families continue to populate the city.

In his local history, It Happened at Rockwood, Oscar A.Carlson reports on the remnants of a French fur trading post being found on farmland owned by Frank Gay, one of the early citizens of Rockwood and one of the first members of the Rockwood First Congregational Church, as well as a record of the first official land deed executed in 1796 with the title “French Private Claims #636” in the general Rockwood vicinity.

It is no surprise that with the historical tensions among the French, British, and Native American populations in this region of the country in the late 18th and early 19th centuries that the Rockwood and Brownstown area was the stage for significant conflict during the War of 1812, most notably the Battle of Brownstown.

Many of the original French settlers were Roman Catholic, and the French presence in the area of Monroe, Michigan, northward into southern Wayne County secured the emergence of a strong Roman Catholic influence that persists to this day. The oldest church in Rockwood began as a mission in 1834 by the Rt. Rev. Peter Lefevre, who was at the time the Bishop of Detroit. It was not until July 11, 1880, that the congregation of St. Mary of the Annunciation was able to dedicate a solid, new brick church building. After a fire destroyed the interior, this was replaced by a new, larger structure in 1911, and a school was instituted in 1930. Both of these achievements were due in part to the industrious efforts of their long-time pastor, Father Toussaint Rose. St. Mary remains the largest church in Rockwood, and the school continues to operate.

Early in the J 880’s, a group of dedicated Protestant Christians were meeting in the old schoolhouse near the site of the present post office. Sabbath services were led on alternating Sundays by the Rev. Robert Parsons of the Flat Rock Congregational Church and the Rev. William Cook of the Flat Rock Methodist Church.

Some among these Protestants felt called to build a church meeting house in which to hold their services. While they considered the possibility of forming a distinctly Methodist church, they felt more drawn to the Congregational ideas that many of those who moved to Rockwood brought from the East, especially from New York.

On March 9, 1886, a meeting was held at the home of Mrs. Emeline Swallow, and the body that would become the Rockwood First Congrega­tional Church was organized according to the state statutes of 1871, as amended in 1879.

Plans and specifications for a new church building were presented and accepted, and a building committee was appointed. J. J. Stevens of Monroe was awarded the contract to build, and the estimated cost was $1,800.

The structure was completed and furnished at a total cost of $2,505.06. Under the leadership of Mrs. Reed, the Ladies’ Aid Society earned the $148.00 to purchase the brick. Contributions were received, ranging from twenty-five cents to $250. The church negotiated an interest-free loan of $500.00 from the American Congregational Union on July 31, 1886 to fully furnish the building.

In December 1950, sixty-four years later, the loan was finally paid in total. The pulpit was donated by the Rev. Leroy Warren of Lansing and the organ was given by Mrs. Austin B. Chapman. That organ has been reworked and is now being used monthly as the communion table from which the elements are served.

Dedication services for the church building took place on September 19, 1886, and were conducted by the Rev. Richard Lewis of Bancroft and Rev. Moses White of Detroit. The property next to the church was purchased in 1957 to provide additional Sunday School space. A basement remodeling project was finished in 1958.

Originally called “Huron Station” when the community first came into being on July 11, 1961, the now-city of Rockwood sta1ted as a typical Mid-western small town in the late 1800’s. A thriving basket facto1y was Rockwood’s most enduring industry, generating the need for three basket shops to manufacture and sell its products. Trolley cars and railroads also went through the heart of the community, declared the incorporated village of Rockwood in 1926. Many small businesses flourished in downtown Rockwood. As the automobile companies blossomed in the region, many residents of Rockwood received employment and became beneficiaries.

An interruption in community life in Rockwood occurred in the late l 950’s and early 1960’s when urban renewal ideas transformed the architectural image of the downtown and the T-75 expressway was birthed. Many historic homes were demolished, one of the last of which was the Swallow home where the Congregational Church was conceived, torn down in the summer of 2007. Ultimately, in order to make room for an entrance ramp to I-75, the Rockwood First Congregational Church building, as well as the adjacent funeral home facility, had to be relocated. The church obtained number of acres of land an eighth of a mile north of its Huron River Drive location, which became 22600 Mather Street.

The hallmarks of Congregationalism are faith, freedom, and fellowship.

Congregationalists trace their roots back to the Puritan movement in England in the 1600s.  Those who eventually broke away from the Church of England sought to worship their Lord in their own way and not by the dictates of the kings and queens or the Book of Common Prayer.

In North America, Congregationalists established settlements first at Plymouth, Massachusetts, in 1620 and then the Massachusetts Bay Colony near Boston, in 1630.  The group that came in 1630 was much larger and influential in eventually spreading Congregationalism westward.  In the 1800s, many churches and colleges were founded by Congregational and Presbyterian efforts to move both beyond the boundaries of New England.

The individual often credited for bringing Congregationalism to Michigan in the 1800s is the Rev. Isaac Ruggles.  He introduced the Congregational Way to southeast Michigan and founded several churches that still continue in ministry, including the First Congregational Church of Clarkston.

This Congregational Way of being church holds that each local church is free to determine its own course in government and theology under the headship of Christ alone.  Congregational churches are gathered, meaning that individuals (“saints by calling” according to early Congregational documents) are free to feel the Holy Spirit move them to form communities.  As Jesus said in Matthew 18:20, “For where two or three are gathered in my name, I am there among them.”  No outside authority, then, can create a church.  It is the people who are called by God to be a church who become a faith community.

Despite this freedom, a central part of being a church of the Congregational Way is choosing to fellowship with other Congregational churches, celebrating achievements and transitions, advising in times of conflict or in the calling, ordaining, or installing of a minister, and supporting one another in occasions of need.

Those who become members of a Congregational church are bound together by a covenant freely entered into by each individual.  A covenant is a sacred agreement or promise made to God and to one another in order to clarify one’s decision to walk with a particular community in faith, service, and mutual care.  The particular covenant of the Rockwood First Congregational Church is stated as follows:

We the people of Rockwood First Congregational Church covenant with the Lord and with one another, to proclaim the gospel of our Lord Jesus Christ, to study and work together so that we may worship and serve Him according to His word.

We pledge to attend the services of our church, observe its sacraments, to teach and listen to God’s Word, provide financial support through out offerings and to participate in the administrative, worship, servicing and maintenance needs of this church as our individual abilities afford.

We pray for wisdom, strength, patience, and God’s guidance as we enter this adventure of faith together.

A declaration of belief is often generated and used in a Congregational church to express what is most commonly held as truth among the members of a particular community.  It is not a test, but a testimony of faith.

As the Constitution of the Rockwood First Congregational Church explains, “We believe in the freedom and responsibility of the individual and the right of private judgment.  Declaring our steadfast allegiance to the faith which our fathers confessed, which from age to age has found expression in the historic creeds of the Church Universal and of this communion, we hereby set forth the things most surely believed among us:

The Rockwood First Congregational Church chooses to be affiliated with the National Association of Congregational Christian Churches.  These several hundred churches are bound together by a common heritage of faith, a conviction to worship and minister as free churches, and by voluntary fellowship.  Congregational churches have the liberty to determine their own government and Christian theology as each local body is under the headship of Christ alone.  Authority rests, then, with each church, and not with a hierarchy beyond the individual congregation.  The National Association serves as a resource to assist each member church with programming, pastoral transitions, decision-making processes, and other needs.  There is an annual meeting held each year at a different location within the United States and the Association has offices in Oak Creek, Wisconsin and Olivet College in Olivet, Michigan.  Olivet College is the home for the Center for Congregational Leadership, a ministry of the NACCC that promotes the educational development of clergy, lay ministers, and lay congregational leaders in a variety of areas, including Congregational history, stewardship, congregational governance, technology, and spirituality.

In addition, the church is a member of the Michigan Conference of Congregational Christian Churches, which includes congregations throughout the state.  The Conference helps local churches with discernment in times of transition and conflict through its Resiliency Team that brings concerned clergy, trained professionals, and congregational leadership together to strengthen and sustain local churches, offers a retreat in January for clergy, holds an annual meeting in the fall, and hosts youth retreats and a Michigan Congregational Summer Camp each year.

Further, the congregation is a part of the Southeast Michigan Association of Congregational Churches, a regional fellowship of approximately a dozen churches in the greater Detroit area.  An annual meeting is held in the spring, mission work is organized including an annual trip to New Orleans to aid in the ongoing restoration effort after Hurricane Katrina, and Christian education events are planned.  The ministers gather monthly September-May for support and enrichment. 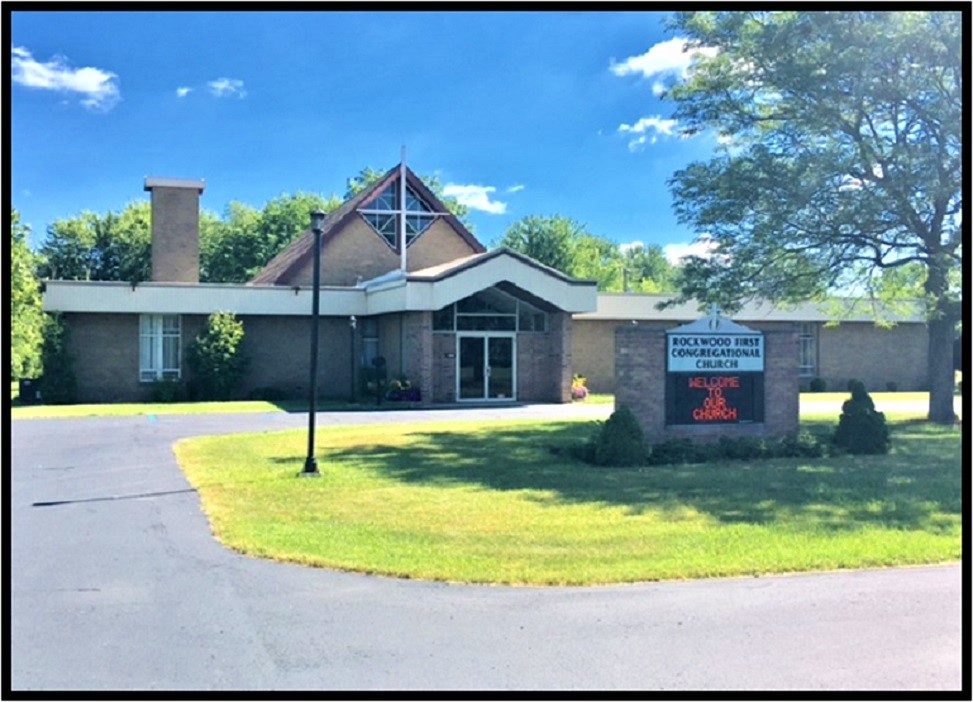 We, the members of Rockwood First Congregational Church, as a fellowship of God loving people are: united in glorifying God; committed to teaching, learning and sharing in Christ’s Word; and determined to live our faith, so that others will come to know Him.